I've been absent from blog-land for a long time now -- still quilting, still taking photos, just not at the computer. You know how life sometimes gets in the way!

But I'm still at it!

It has been over a year. Yikes! About the time I was posting the last quilts I was also getting two quilts of my own completed and ready for entry at MQS 2013 (Machine Quilter's Showcase). I pieced and quilted both of them and shipped those babies off to Wichita (at the last possible minute, of course.) I know many of you know the outcome of that show, but the photos never made it here, so that is where I am going to pick up. 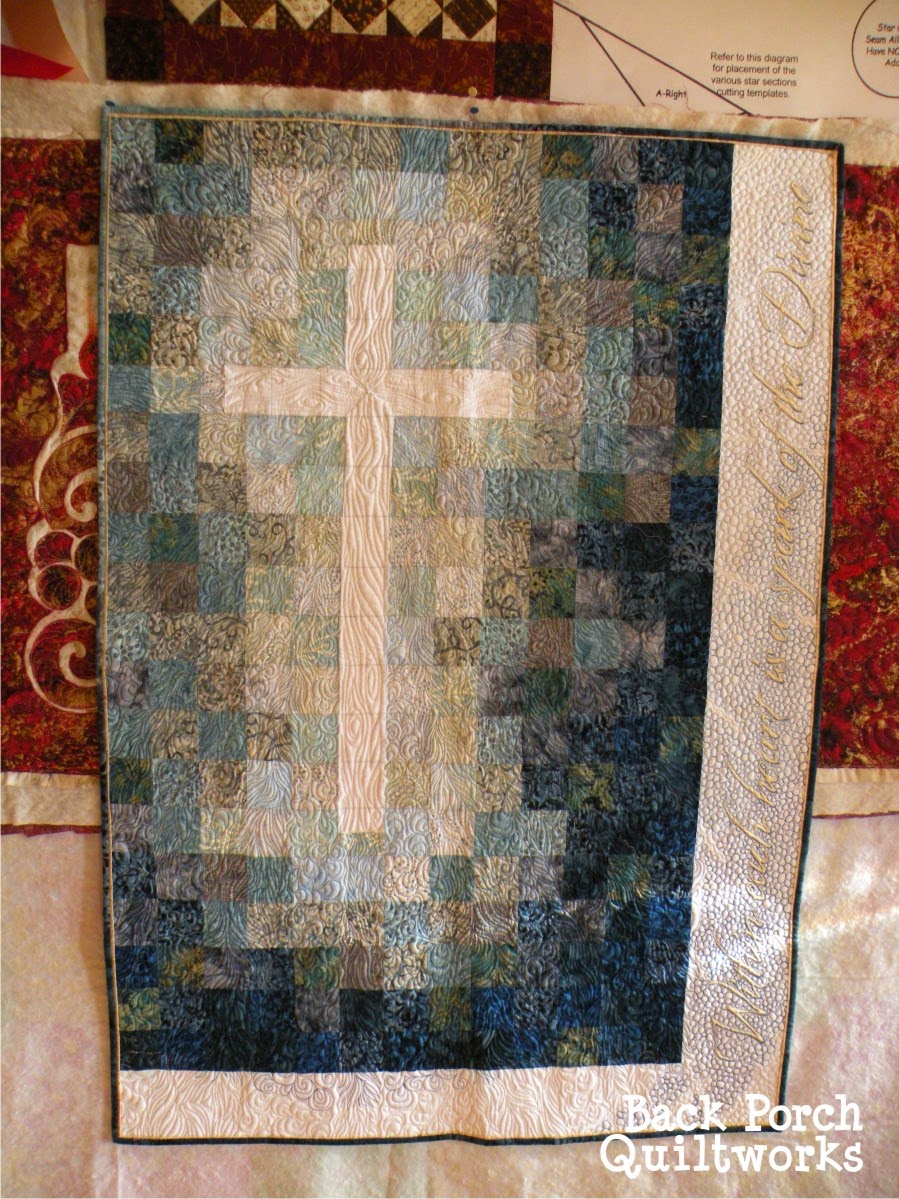 The first quilt, Let Your Light Shine, was one of those designs that danced in my head for a while before I cut into the first piece of fabric. I wanted to play with the water color effect of lights and darks and chose to build that around a cross. I really had the quilting in mind before this was even pieced. I wanted rays coming out from the center and a quote quilted into the border.

Once the main body was pieced (quick squares and strip piecing) I made the asymmetrical border. I actually traced the lettering on before it was attached. I printed my quote, "Within each heart is a spark of the Divine" on my computer the exact size I wanted it and taped the multiple pages together. I then used a blue water-erase marker to trace that onto my white fabric. This may not have worked with any other fabric, but the white was translucent enough to see through. It was then attached to the main body of the quilt and ready for quilting. 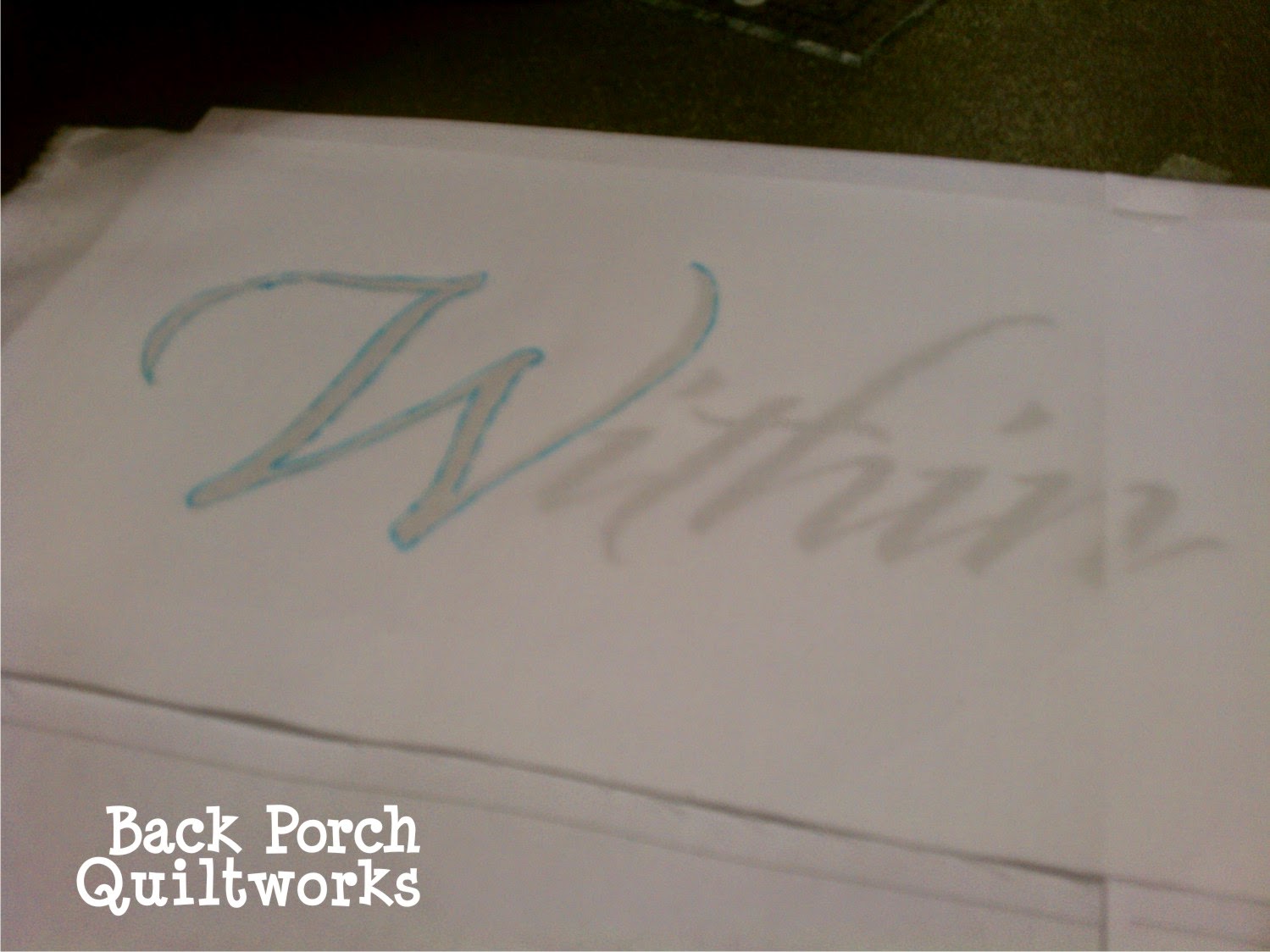 I started in the cross and drew rays towards the outside of the quilt. I then alternated different fills between the rays. The cross itself was quilted like wood grain. 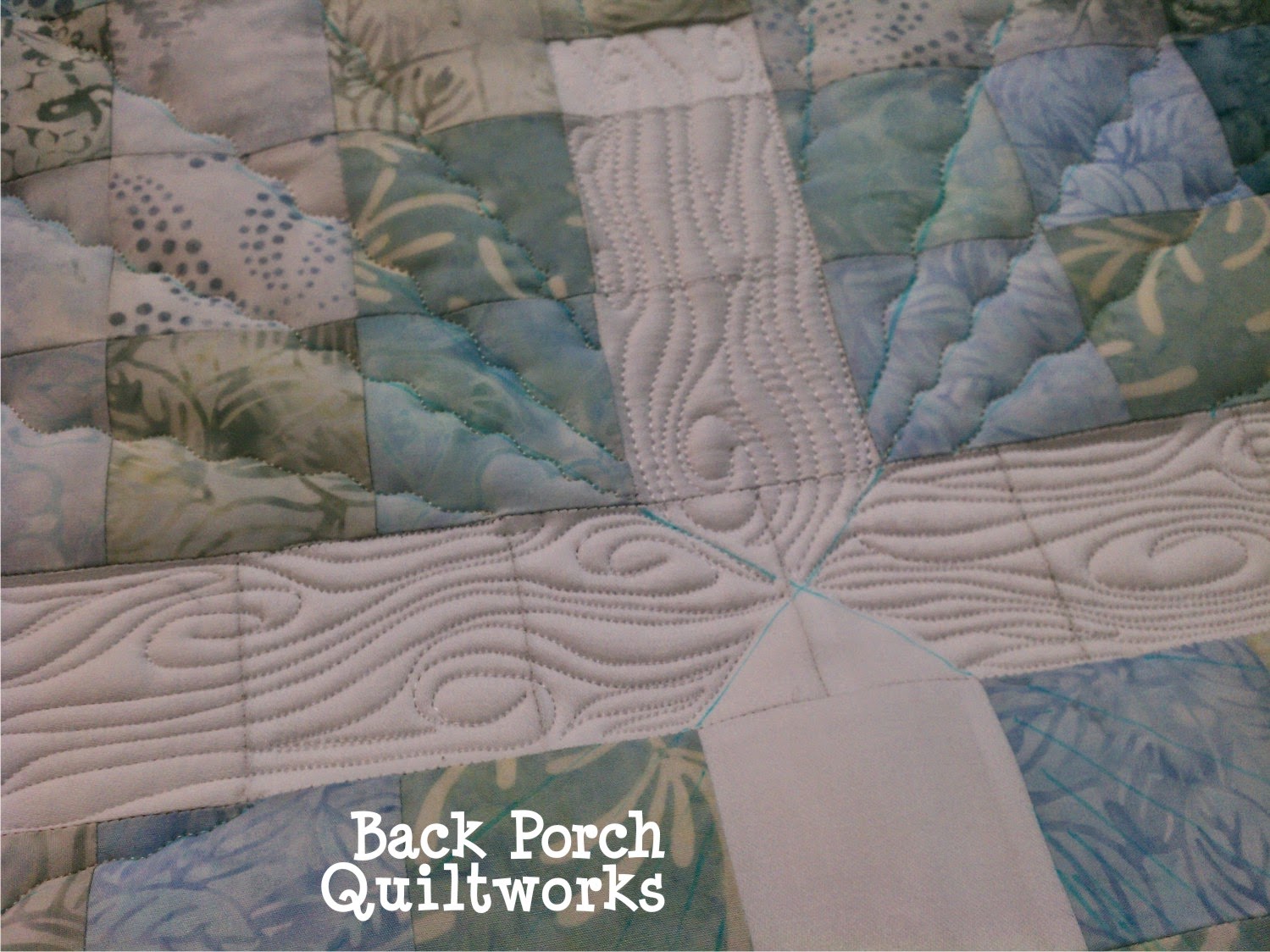 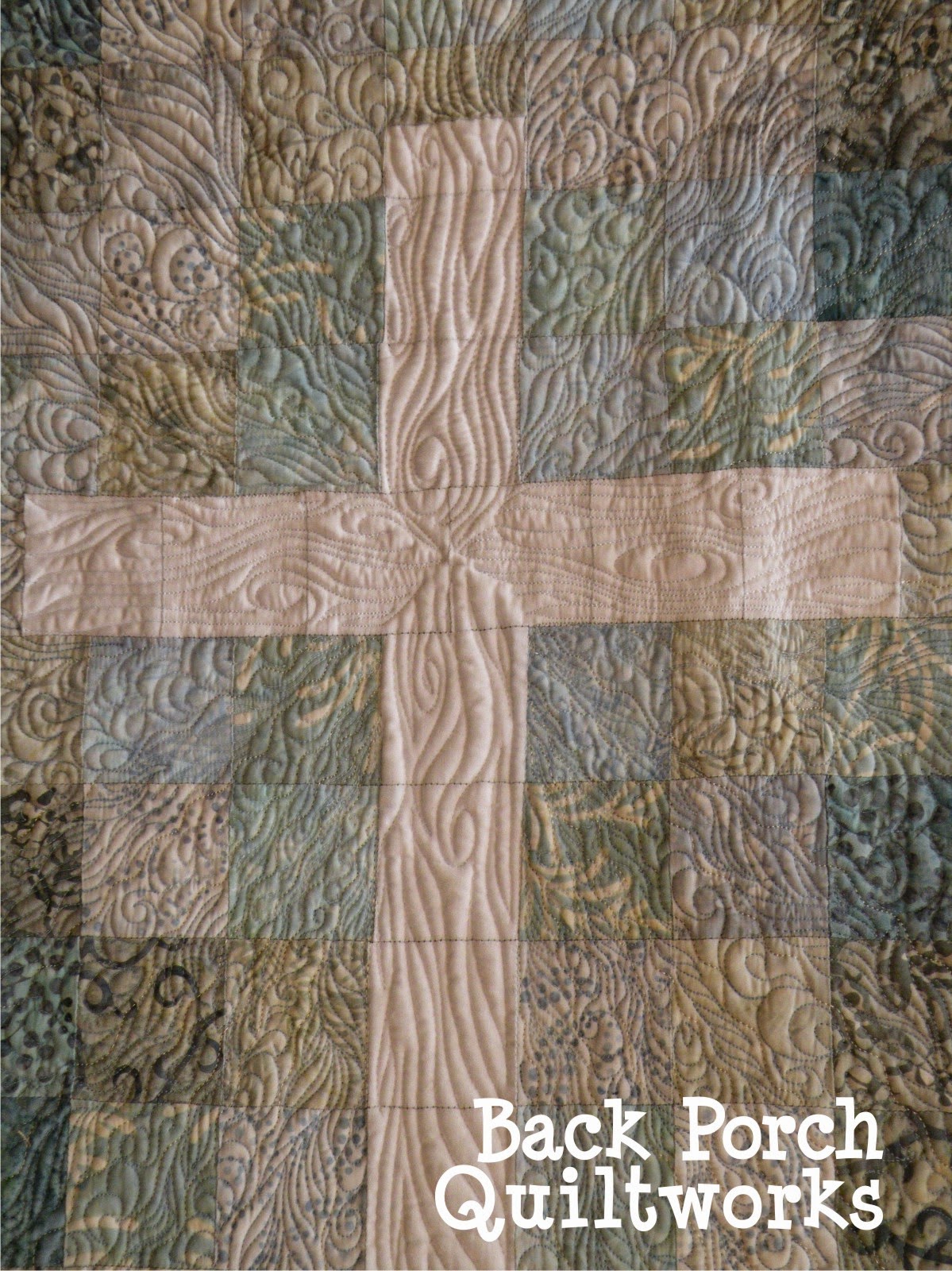 I used four different shades of blue thread and worked lightest to darkest from the center outward. (This is more evident on the back of the quilt.) 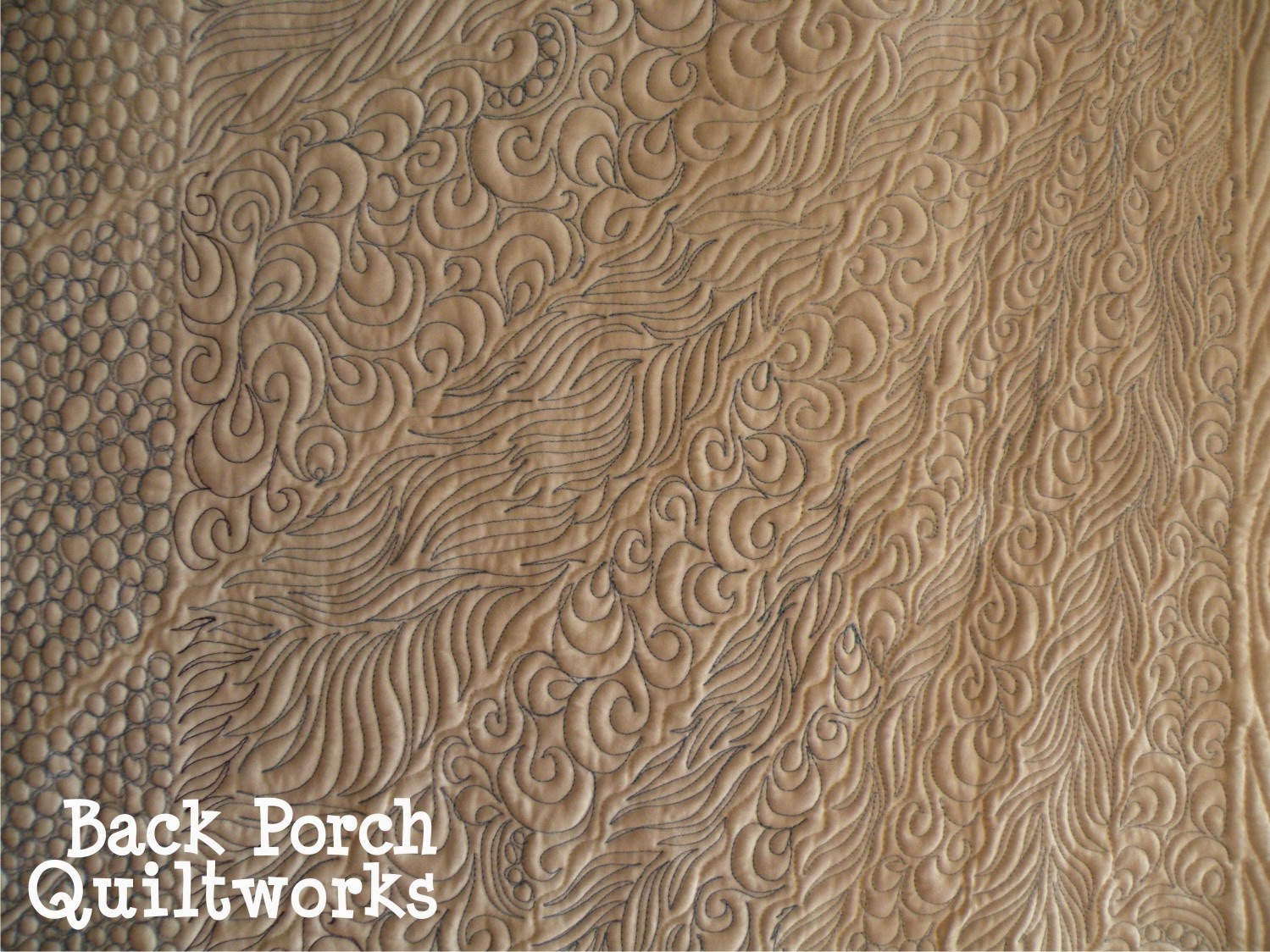 The color gradation spilled onto the white border where I outlined the lettering and then pebbled around that. Just F.Y.I. Pebbling. Takes. Forever. It is also much prettier (in my opinion) if the thread color matches the fabric. Mine did not. 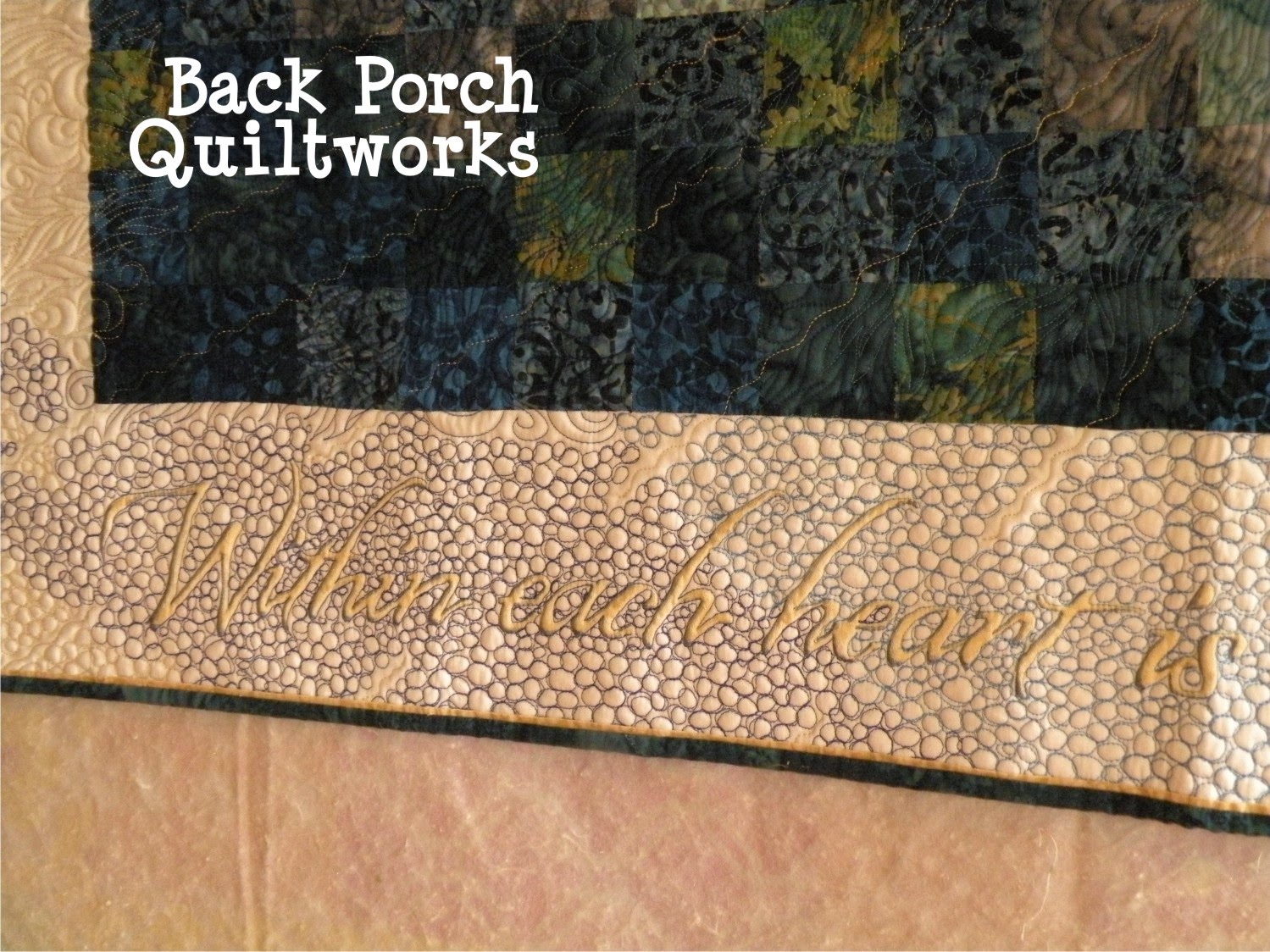 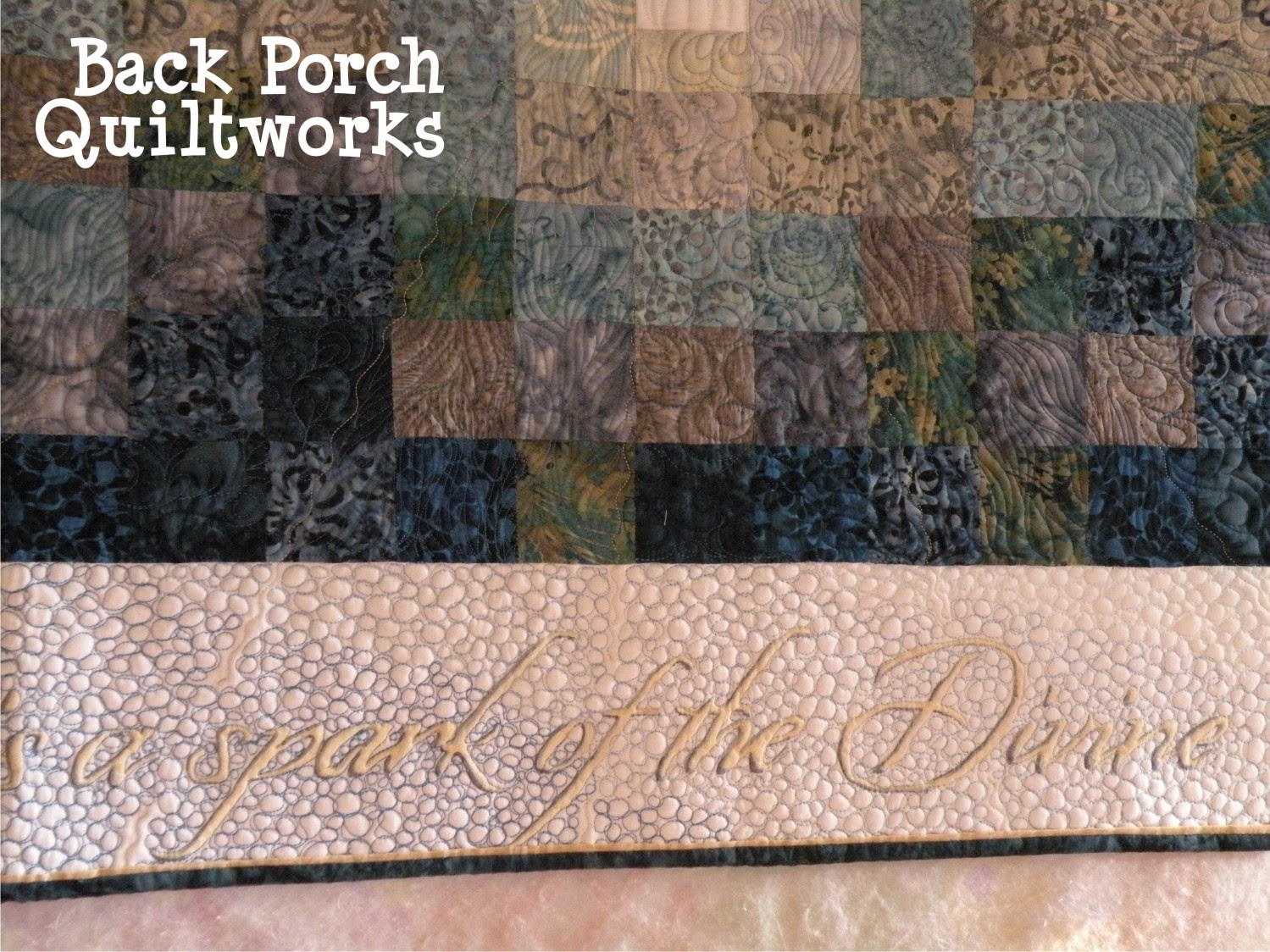 This photo was taken after returning from the show. Originally, the lettering did not show up near enough in the quilting so I painted it a pale yellow. That is how it went to MQS. Several months after that I went back and made the yellow darker and added the navy shadow effect. It is still a little subtle and the font I chose made the quote difficult to read. I'll know better next time. 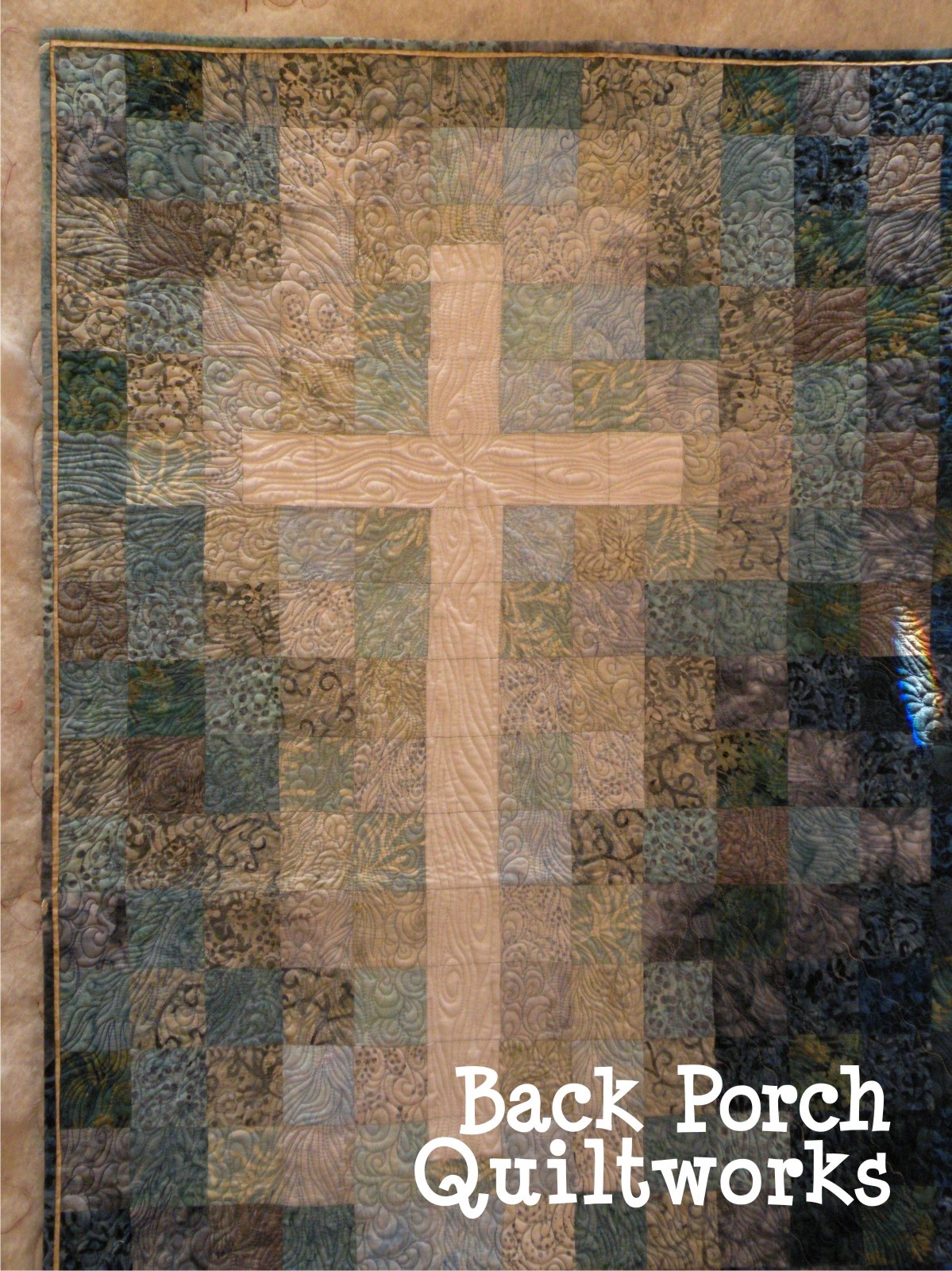 To finish the quilt I added a gold flange at the edges to complement the gold in the lettering and gold rays (very subtle) in the quilting. It seems to get lost in the busy fabrics, but I made the binding gradated as well. It is lightest at the top left and changes to dark in the lower right. That was one of my favorite features but is hardly noticeable unless it is pointed out. Again, I'll know better next time.

I'm glad I completed this quilt and that it hung in a major show. It definitely forced me out of my comfort zone. I knew going in it was nowhere near the amazing quilts that hung around it. The whole process taught me a great deal. And isn't learning and growing what it is all about?

Sorry this got so long. In the next post I'll share quilt number two that went to MQS!
Posted by motherbuzzard at 10:02 PM 2 comments:

How fitting that I finished quilting this wallhanging yesterday just in time for the Fourth of July. This patriotic number will become a raffle quilt by the Northland Needlers at their upcoming quilt show. You can find out more about their show here. 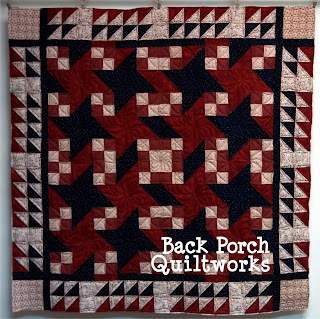 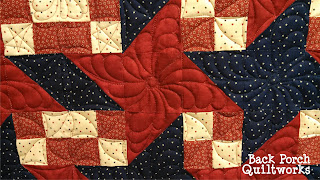 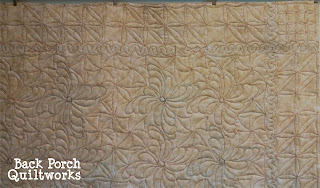 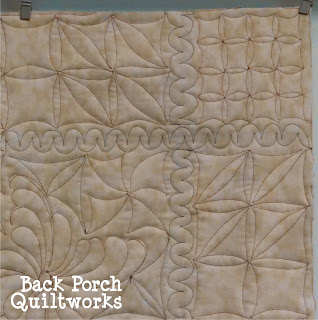 I quilted a twirling feather in the friendship stars and used a variety of continuous curves in the four patches and triangles. The blue sashings got a chubby rick rack. The batting was Hobbs 80/20 and thread was Glide in maroon and navy.


I hope everyone has a fun and relaxing Independence Day! I plan on taking the "relaxing" part real serious. Dave is going to be on barbeque duty while the boys will be busy blowing things up. Maybe I will get in a little sewing machine time!

The yellowest dandelions on the block

Spring is really trying to burst forth around here despite freezing temperatures, frost in the mornings, sleet, and the occasional random snow flake. I'm cheering it on and hoping we have finally made that last cold-weather hurdle. The sand cherry popped this week and everything is starting to green up. The dandelions, as always, are equally excited about spring. 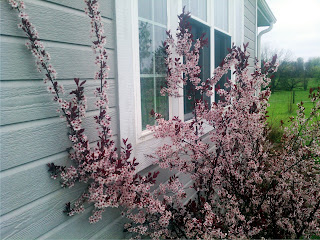 This week first grade has been studying plants. They've talked about the life cycle of plants and how they take up nutrients. They put a plant in colored water and watched how the color moved up through the plant. Changing a plant's color is, after all, mighty impressive to a seven-year-old. After my resident first grader explained to me everything one should know about plants, he told me he knew why the dandelions in our yard were so yellow... "because I pee on them!"

Thank you, Nick! So if anyone needs to brighten up your dandelions, I'm sure Nick would be willing to service your yard as well. 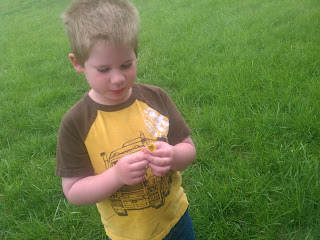 Happy Spring!
Posted by motherbuzzard at 10:25 AM 2 comments:

Email ThisBlogThis!Share to TwitterShare to FacebookShare to Pinterest
Labels: kids

Have you tried raw-edge applique? I haven't yet, but loved the look when I got this top to quilt. Even better, it a quick and easy technique. The applique pieces are sewn directly to the background -- no fusing, no turning under, no hand work! Allison at Cluck Cluck Sew has a great tutorial here.

I may have to give this a try! 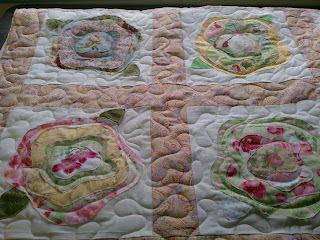 The customer wanted a loose meander around the flowers and minimal stitching within them. The flowers were made of four layers, so I did a free-form line through the first and third layers. This pushed the fabric down just enough to make the raw edges pop up a bit. After washing, they will become even more pronounced as the edges fray. The batting was Hobbs 80/20 and thread was So Fine off ivory top and bottom. 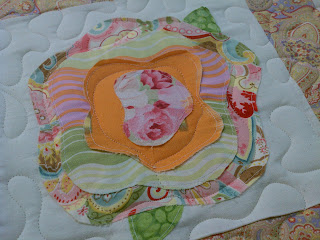 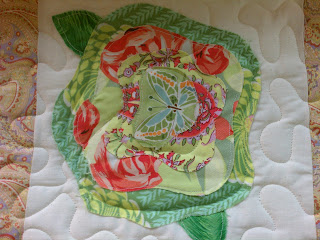 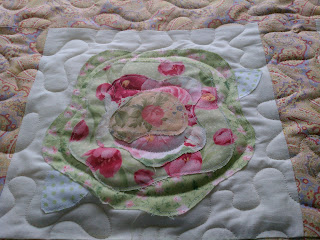 I loved Kitty's use of all the different floral fabrics. This gave it a very feminine, vintage, cottage look. What fun!
Posted by motherbuzzard at 6:30 AM No comments:

The luck o' the Irish brought me this cheerful Double Irish Chain quilt. The customer requested shamrocks in the open spaces and feathers in the chains using green thread. In the outside borders I put a wavy line and an alternating heart. The batting was Hobbs 80/20 and the thread was So Fine top and bottom. 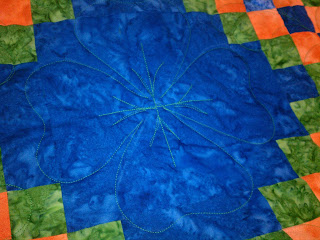 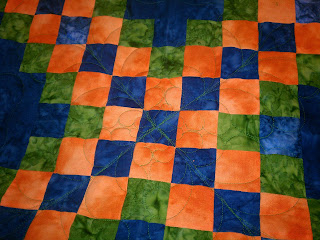 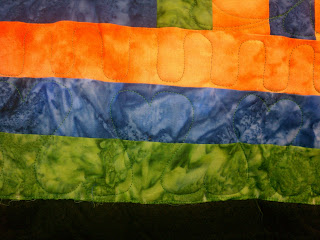 Posted by motherbuzzard at 6:00 AM No comments:

In honor of such a special occasion, I think my sewing machine and I are going to get reacquainted. I know she's under the pile here somewhere.

Now I just need to decide if I'll drag out a WIP (work in progress), PIG (project in grocery bag), or UFO (un finished object). There are many to choose from...

Who would I have to call to arrange for World Wide Quilting MONTH? Please let me know if you have their number.

Happy Quilting, everyone!
Posted by motherbuzzard at 12:51 PM No comments:

I recently finished a commission quilt for a customer using a collection of her son's hockey jerseys. She requested irregular piecing and that the "battle scars" on the jerseys be included. 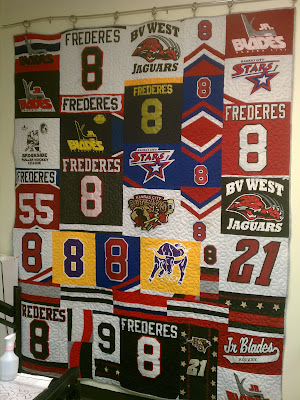 She couldn't remember if he was kicked with a skate blade here or hit with a stick. Ouch, rough sport! 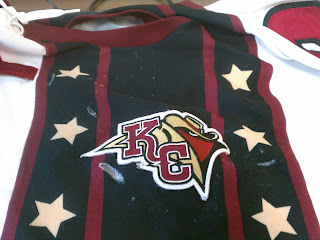 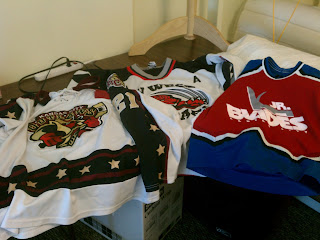 This quilt got an all-over meander in a medium grey. The batting was Hobbs 80/20 and the thread was So Fine top and bottom. 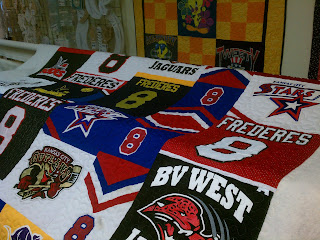 Great memories preserved!
Posted by motherbuzzard at 5:30 AM 1 comment:

motherbuzzard
Harrisonville, Missouri, United States
I am Tina Bussard, aka motherbuzzard. Quilting is my passion. It is my hobby, my job, and makes everything better. If I could only get it to cook me dinner and do the laundry, I will have it made! I make quilts for me and those commissioned for others. I work independently and am not affiliated with any one store or website except BackPorchQuiltworks (me). Please contact me directly with any questions or requests. Pull up a rocking chair and join me on the porch. We'll make something fun.